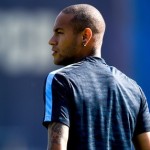 The freezing of €42 million of Neymar’s assets by the Brazilian authorities for tax evasion between 2011 and 2013 saw Ribeiro post a letter to Neymar’s father on Instagram.

“Take your money, bring it all to a tax haven, legally of course. That way you won’t have to pay taxes in Brazil. Close your companies, the Instituto de Praia Grande and enjoy life on the many Mediterranean beaches. You and your family. But give Neymar a few more years of football, let him finish his career in Europe, preferably at Real Madrid.”

Ribeiro also commented about the father’s handling of an earlier chance to join Real Madrid.

“He never paid so that his son would play and he decided to take him back to Brazil rather than sign with Real Madrid at underage level (and now he’s at their biggest rival!). He didn’t want to pay for the services of two journalists who offered their services as advisors to his son in 2009. If they had acted differently, he wouldn’t have fought with the agents and would have stayed in Madrid where Neymar would have become a naturalized Spanish citizen.”

Fabio Coentrao : I Want To Play For Real Madrid!