It has been reported that Manchester United are prepared to pay what it takes to land Barcelona superstar Neymar. 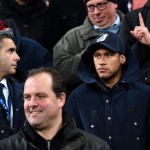 The Sun claims that the Brazilian is interested in United’s massive wage offer of £130m over five years.

It is also said that he has a £165m release clause which Louis van Gaal is ready to pay.

Neymar has been offered the lucrative package in top-secret meetings.

The winger will not be heading to Old Trafford in January but Red Devils big wigs are keen to make the deal happen in the summer.

United tried to sign Neymar earlier this year but it appears that was just the ground work for a move in 2016.