It has been reported that Arsenal are keeping tabs on Nice goalkeeper David Ospina at this month’s World Cup. 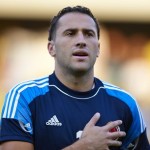 It is said that the Gunners could make a move for 25-year-old Nice goalkeeper Ospina, depending on his World Cup displays with Colombia.

Ospina is aware of Arsenal’s interest and his intermediaries have made clear his ambitions to move to the Premier League.