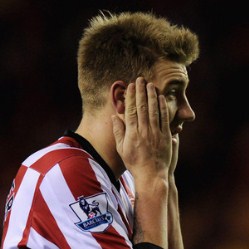 Sunderland stars Lee Cattermole and Nicklas Bendtner have been arrested in connection with a car-wrecking spree in Newcastle.

A number of cars were damaged in the attack last week in a Newcastle street close to St James’ Park, home of Sunderland’s fierce rivals Newcastle United.

The duo, who are both 23 years old, were arrested on Thursday and questioned over the incident before being released on bail.

“Police can confirm that on Thursday, December 15, two men aged 23 were arrested on suspicion of criminal damage,” police said in a statement.

“If follows an investigation in to damage caused to cars on Stowell Street in Newcastle city centre, which happened at about 10pm on Tuesday, December 6.”

The Evening Chronicle reported that at least three cars were damaged in the attack, adding that police are studying CCTV footage to establish exactly what happened.