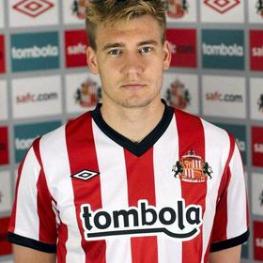 Nicklas Bendtner has denied declaring himself potentially the best striker in the world while at Arsenal.

The Danish international striker said he has hardly watched Arsenal on television this season, but that he hopes his ex-team-mates overcome their difficult start to the season.

The 23-year-old, likely to lead the attack against Stoke on Sunday, said: “It’s very different from London, but you just have to learn and adapt.

“I have rented a good house and am probably going to spend most of my time there as I did in London, and then spend time with my family when I am not playing football so it’s going to be okay.

“It’s different but I think you should be willing to adapt everywhere you go. Obviously it’s not what I’m used to but I’m sure I will have a great time here.”

Bendtner has been dogged by an interview he gave 18 months ago where he was quoted as saying he viewed himself as “one of the best strikers in the world” but that he needed to score more goals, and he was keen to set the record straight at Sunderland’s training ground in Cleadon.

He added: “What I said is that when a striker scores more than 20 goals a season then the papers are quick to say now he’s one of the best strikers in the world.

“I said I thought in my game that I can always improve but the thing that I missed that I needed to do was to score more goals.

“But it was difficult for me as I never really got a run of games so I didn’t have a chance to do that.”

I Would Like To Be Arsenal Manager – Tony Adams

Yann M’Vila : I Want To Play For Arsenal!