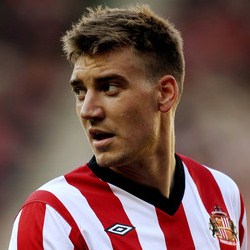 Sunderland striker Nicklas Bendtner has declared that his loan move from Arsenal has made him a happier person.

For the draw with West Bromwich Albion, the Danish international striker began the Black Cats fightback with the first goal of his loan move and then set up the equaliser for Ahmed Elmohamady as Steve Bruce’s men recovered from a horror opening.

Bendtner, now age 23, admitted: “At Arsenal I did play but then I had a terrible car crash and it was difficult to get back in the team.

“I had a few games here and there but, when I played, I wasn’t a happy guy. No one is good when they’re not happy, are they?

“I needed to be happy again and knew this was a place that could fulfil my ambitions and make me smile again in the morning.

“I am much happier now. I look forward to training every day and have not felt like that for a very, very long time.”