Nicklas Bendtner Linked With A Move To Stoke City 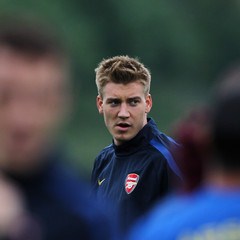 Reports have surfaced that Stoke City have made a move for Arsenal striker Nicklas Bendtner.

The Daily Mail has reported that the Danish international striker has been given a chance to stay in the Barclays Premier League by Stoke City.

The Arsenal striker seemed to be heading to Sporting Lisbon in a £9million deal last week.

However, his availability alerted Stoke manager Tony Pulis, who has made an enquiry for the Danish forward.

Bendtner’s response was to ask his advisers to find out what the Potteries club had to offer as he would love to continue playing in England.

The striker wears the No 52 shirt at Emirates Stadium, a reminder of his £52,000-a-week wages, and he would have to take a cut if he was serious about joining Stoke.

Alvaro Morata Wins The Golden Boot For The U19 European Championships