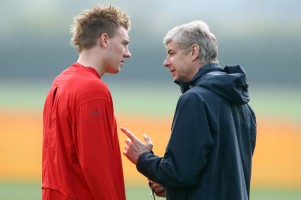 Arsenal striker Nicklas Bendtner has declared that he will repay the confidence shown in him by boss Arsene Wenger by shouldering the goalscoring burden of a title challenge.

Bendtner was on target in the 27th minute in their 2-0 win over Sunderland, his second since returning from ankle surgery, which ruled him out for three months.

Wenger had remained patient and waited for Bendtner’s return, rather than purchasing a striker in the transfer window.

Bendtner told reporters that he has been ready to carry the fans’ hopes for some time and that it is nothing new to him.