It has been reported that Arsenal players were delighted for Nicklas Bendtner after he scored in victory over Hull City. 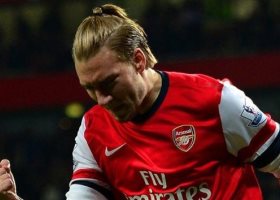 “He’s looked sharp in training and I think he really stepped up to the mark [against Hull] and the boys were saying how well he’s done.

“Obviously that’s fantastic for us because we know when he puts his mind to it he’s top drawer.”