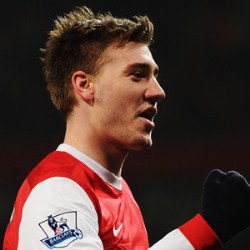 Nicklas Bendtner is ready to quit Arsenal for a move to the Italian Serie A.

The Danish international striker has revealed that he is ­desperate to quit the Gunners and reignite his career with Inter Milan.

San Siro giants Milan are said to be keen on a move for the 23 year old, who is surplus to requirements at the north London club.

And a move to Serie A would suit the big ­striker, currently on holiday in Las Vegas.

Bendtner told the Daily Star Sunday : “There is no doubt about it and I am 100 per cent leaving Arsenal,”.