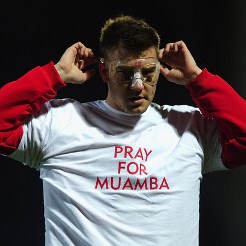 The Danish international striker rates Ferguson ahead of his Arsenal manager Arsene Wenger.

“How many millions would I have to pay him to be allowed to come and play for him before he retires?” he said.

“Well, we can joke about it but Sir Alex is a true legend as a manager. Respect from the bottom of my heart for everything he has achieved and for what he has done for football in general. There is only one way and that is the Fergie way.”