Reports are out claiming that West Brom striker Nicolas Anelka has been banned for five matches and fined £80,000 for making an offensive gesture which breached the FA’s anti-discrimination rules. 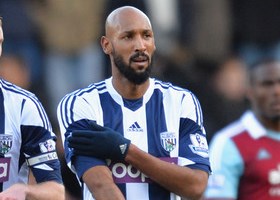 The 34 year old had been charged for making the ‘quenelle’ sign against West Ham on December 28, which has been described as a “reverse Nazi salute”, in tribute to comedian friend Dieudonne.

The former Arsenal and Real Madrid star was charged with an aggravated offence after making a gesture that was judged to be “abusive and/or indecent and/or insulting and/or improper”.

The aggravated breach was that it included “a reference to ethnic origin and/or race and/or religion or belief”.

Anelka argued that the gesture is not anti-semitic but anti-establishment. However, after months of investigation and careful deliberation, the FA decided that there was a discriminatory element to the sign and have banned the player accordingly.

Anelka has the right to appeal, and has also been ordered to attend a course. The penalty is suspended until the outcome of any appeal which must be made within seven days.