Reports are out claiming that former Arsenal and Real Madrid striker Nicolas Anelka is ready to resume his playing career. 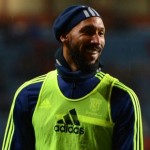 The former French international striker appeared to quit the game after being released by West Bromwich Albion amid his ‘quenelle gesture’ controversy.

However, The Sun reported that Anelka is in talks with Standard Liege about a move to Belgium.

Now 35, Anelka flirted with Brazilian football earlier this year, speaking with Atletico Mineiro before failing to turn up for training.

However, Standard are now willing to give Anelka a chance in preseason.