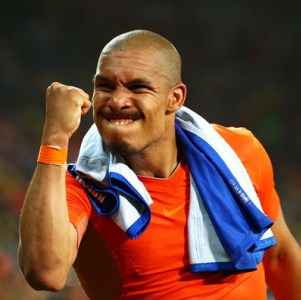 According to The Daily Mail, De Jong has decided to let the dust settle on the incident and his subsequent exclusion from the Holland squad before making any decisions about his future under Bert van Marwijk.

The Dutch coach responded to De Jong’s challenge by dropping him from the squad to face Moldova and Sweden in Euro 2012 qualifiers in the next few days.

It is believed that Van Marwijk told the 25-year-old in a phone call on Monday that the ban would last for two games, but it is not known if De Jong will agree to come back.

Mancini : Hargreaves Can Be Good For City And England!