It has been reported that Leicester City boss Nigel Pearson was full of praise for his players after they produced a stunning comeback to defeat Manchester United 5-3 at the King Power Stadium on Sunday. 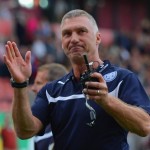 The Foxes produced their first home victory over the 20-time Premier League champions since 1985 by scoring four times in the second half after trailing 3-1 prior to the hour-mark.

Robin van Persie and Angel Di Maria had united two goals ahead before summer signing Leonardo Ulloa pulled one back for the Foxes in the 17th minute.

Ander Herrera struck again for the Red Devils to give the visitors what you would have expected to be an unassailable lead but the top flight returnees turned it on from the 62nd minute courtesy of a penalty to David Nugent and stabbed finish from Esteban Cambiasso to make it 3-3.

Leicester then edged in front in the 79th minute when Jamie Vardy netted before Ulloa wrapped it up from the penalty spot in the 83rd minute after Tyler Blackett had been sent off for bringing down Vardy.

It was a fairytale victory for the Foxes but Pearson was looking to keep a lid on things after securing a second win on the trot for last season’s second tier champions.

“Back to back Premier League wins never easy, especially if newly promoted. Coming from 3-1 down testament to our belief,” Pearson told the club’s official website.

“We exploited wide areas in transition, more so second half. Our responses were quick and shifted momentum. Players resilient.

“We continue in a positive vein. Their first 2 were high quality but we could have done better. We were full value for the win.”

The victory allowed Leicester to move up sixth on the league table as Louis van Gaal’s United dropped to 12th with their second defeat of the season.