Reports are out claiming that Nigerian youngster Victor Osimhen admits he chose VfL Wolfsburg over Arsenal. 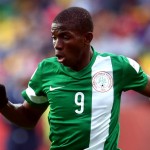 Osimhen, 17, has agreed to join the Bundesliga giants next January as he cannot sign a pro deal until he turns 18 in December.

He told BBC Sport: “It’s true that a big team like Arsenal wanted me and I feel honoured to be invited over.

“But personally I feel Wolfsburg is a ladder for me to reach my professional goals.

“Yes Arsenal is a good team for young players but Wolfsburg is the best club for me.

“This the best place for me to learn and develop because my heart is here with Wolfsburg.

“The club’s plan for my career is very encouraging and I believe with God on my side I can grow to become one of the best players in the world.”