According to reports from the London Evening Standard, Nigerian youth international Kelechi Nwakali is close to completing a move to Arsenal, his older brother Allwell has confirmed. 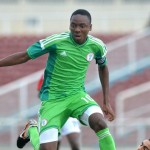 Arsenal had faced a battle to acquire the duo, with Manchester City, Barcelona and Bayern Munich monitoring 17-year-old attacking midfielder Kelechi, who currently plays at the Diamond Football Academy.

However Allwell has suggested that Arsenal have won the race for his brother, with Arsene Wenger’s track record of developing young players helping to sway the Nwakali family.

“Arsenal are known to have a good programme for young players,” he said.

“They develop young stars and enhance their careers, and the records are there for anyone to see and admit that we made the right and honourable choice.”