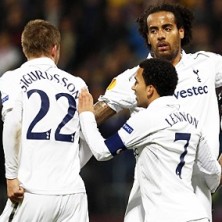 Gylfi Sigurdsson helped Tottenham rescue a point in Slovenia after an inept performance at NK Maribor saw them slump to a third successive Europa League draw, this time 1-1.

The former Swansea midfielder has yet to find his feet since his summer arrival, but went some way to repaying the north Londoners’ faith by lashing home to ensure his side did not leave the Stadion Ljudski vrt empty-handed.

It was a goal that saved Spurs’ blushes in what was a frustrating night against a Maribor side that came into the match with a record of just two wins their previous 15 European games on home soil.

The Vijolicasti lost home and away to the npower Championship side Birmingham in last season’s competition yet took the lead three minutes from half-time when Robert Beric prodded home.