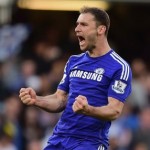 The odds are in their favour against Arsenal because manager Jose Mourinho has never lost to counterpart Arsene Wenger — a total of 12 matches.

However Ivanovic has downplayed the significance of Mourinho’s dominance and is adamant Chelsea won’t be taking anything for granted.

“I don’t think the record will help us,” he told the London Evening Standard.

“The manager won’t be relying on that. He will be putting a lot of pressure on us for sure to win there.

“We will approach this game like every other match. We can go there without any pressure after the win against Manchester United.

“But our attitude and performance has to be the same as it was against United to go there to win.

“We can’t relax. We are almost there, but at the same time we are so far away. We have six games to go, which is a lot of points and we know we have to be really careful not to think beyond the next one.”