Reports are out claiming that Dimitar Berbatov has admitted that not many people expected Monaco to progress in the Champions League as far as they have. 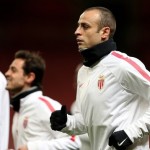 The French club are through to the quarter-finals after beating Arsenal on away goals despite a 2-0 loss at home in the Round of 16 second leg on Tuesday night.

When asked by UEFA if he envisaged Monaco getting through to the last eight of Europe’s premier club competition, the Bulgarian striker said: “I don’t think anyone expected that.

“We were believing that we were doing something special because we have good players. Our team is very young and we have great talent.

“As you can see, we surprised many people and we qualify for the next round against today, for example, a strong Arsenal team.

“But we fight as a team today, a bit of luck, but in the end we go to the next phase.”