Luis Suarez fired his 30th league goal of the season and Raheem Sterling hit a brace as Liverpool moved five points clear at the top of the Premier League with a rollercoaster 3-2 win at Norwich. 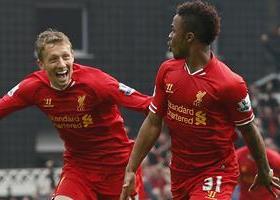 The Uruguayan striker, who is the clear favourite to be crowned PFA player of the year, doubled the Reds’ advantage on 11 minutes with a clinical side foot finish.

It looked to have put the visitors on easy street after they broke the deadlock moments earlier when Raheem Sterling sizzled a stunning 25-yard strike into the corner.

It was the worst possible start for Norwich but they reduced the arrears after the break when Gary Hooper tucked into an empty net after Simon Mignolet’s clanger.

Liverpool were under the cosh but regained their two-goal advantage soon after when Sterling’s dynamic run ended with a shot that looped off Bradley Johnson and over the stranded John Ruddy.

The home side refused to give up hope, however, and they made it a nervy finale when Robert Snodgrass rose to head home Martin Olsson’s left-wing cross 13 minutes from time.

The result sees Liverpool secure an 11th straight win and moves them five points clear of second-placed Chelsea ahead of next Sunday’s showdown between the two sides at Anfield.