Aaron Ramsey and Carl Jenkinson secured a 2-0 win for fourth-placed Arsenal at Carrow Road as Norwich City dropped to the Championship. 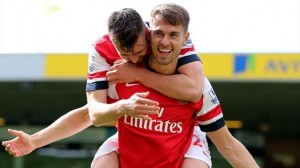 Ramsey volleyed a Grade-A opening goal into the far top corner early in the second half following great play from Olivier Giroud before right-back Carl Jenkinson, of all people, doubled their lead nine minutes later with a distinctly less-graceful close-range finish.

With their league position pretty much secured before kick-off, Arsene Wenger’s men will have had one eye on Saturday’s FA Cup final against Hull City, where they will look to lift silverware for the first time since beating Manchester United on penalties for the very same trophy in 2005.

But the virtual dead rubber – Norwich too would have needed a huge goal difference swing to avoid their doom at this point – served as a stage for some decent if unspectacular expressive football with zero pressure on either side – and it also marked the return from injury of Jack Wilshere, Abou Diaby and Norwich’s Elliott Bennett.

And following an abject campaign punctuated by the dismal failure of big attacking signings such as Ricky van Wolfswinkel (who didn’t even make the matchday squad for this game), City will hope the exciting cameo of 20-year-old Jamaican forward Jamar Loza will be a sign of things to come back in the second tier.