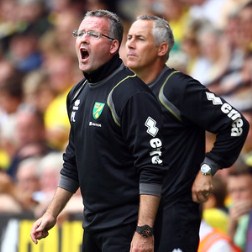 Norwich City conceded an injury-time goal to draw 1-1 at home to Stoke City after defender Leon Barnett was dismissed in controversial circumstances at Carrow Road.

Ritchie De Laet gave the Canaries the lead at home with a well-taken header after 37 minutes but the key moment of the match came in the second half as Barnett was harshly dismissed for bringing down Walters after some unconvincing defending.

Replays showed that the initial contact was outside the box and that Walters perhaps went to ground too easily, but a penalty was given by referee Neil Swarbrick. Walters, a former Ipswich player, stepped up, but to the delight of Carrow Road his spot-kick was saved by Ruddy.

Kenwyne Jones was guilty of a horrible miss as Stoke spurned a succession of chances but after defending superbly well, Paul Lambert’s side were cruelly denied all three points three minutes into injury time when the Trinidad and Tobago striker headed home.