Reports are out claiming that Arsenal defender Ignasi Miquel is wanted by Norwich City. 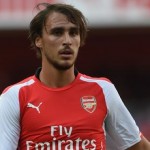 The Daily Mail reported that Norwich have made an offer for Arsenal defender Miquel.

The Spanish prospect has struggled to break through at The Emirates and is in the final year of his contract.

The 21-year-old, who stands at 6ft 4in, had a seven game spell on loan at Leicester City last season.