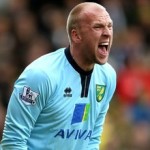 Reports are out claiming that Norwich City are reluctant to lose goalkeeper John Ruddy to Arsenal.

The People reported that Ruddy is a target for Arsenal as Arsene Wenger searches for a keeper to ­challenge Wojciech Szczesny.

Norwich fear they may lose their England keeper after relegation and Ruddy, 27, is on a list of potential ­signings for the Gunners.

Norwich will not allow Ruddy to go on the cheap – and are likely to demand around £7m – with the Canaries goalie having publicly pledged his loyalty to the Carrow Road club.