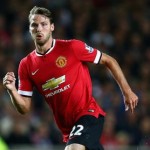 Powell has returned to United after a disappointing loan spell at Leicester City.

Freedman tried to sign Powell while manager at Bolton and believes the talented midfielder can lift his mid-table side up the Championship table despite questions about the player’s attitude, says the Daily Mail.

Powell was in action as United’s U21 side beat Chelsea’s U21s 2-1 on Monday night.