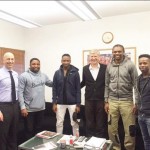 Reports are out claiming that Arsenal hero Nwankwo Kanu had a big say in their swoop for Kelechi Nwakali.

The Nigeria Under-17 international has reportedly penned a five-year-deal with the north Londoners.

A source told Allnigeriasoccer.com: “Kanu Nwankwo has played for Arsenal, so Arsene Wenger contacted him to ask about Nwakali. Through him, Arsenal were able to sign the player.

“Nwakali has an agent, Stellar Group, but Kanu was brought in because he is close to us, so we connected him with the British agent.

“Arsenal followed him during the World Cup. Manchester City wanted him even before the tournament but told him to train with the Academy team before being offered a contract, so the deal collapsed.”