It has been reported that New York Red Bulls striker Thierry Henry is excited to be facing Arsenal later this year. 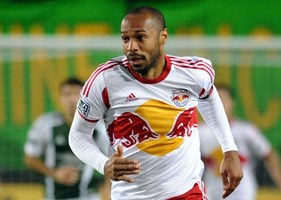 The Gunners announced on Thursday that it will play against Henry’s New York Red Bulls at the Red Bull Arena on July 26.

“I was obviously over the moon and excited [when I heard about the game],” Henry said.

“Not really for me, but for the fans to be able to see Arsenal here and for the guys in the team. To be able to play against Arsenal doesn’t happen often and hopefully it’s going to be good day.

“Everybody knows how much I love Arsenal. When I found out we were going to have them here to play in New York, for some reason I was doubting it because Arsene was always the guy not wanting to go too far away from Europe until recently, when they’ve been going to Asia.

“I said to myself, ‘Why don’t they come to the US?’. They were the only team from the Premier League that didn’t come.”