It has been reported that Oguchi Onyewu has admitted to feeling completely disappointed following his non-selection for the USA national team. 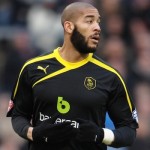 The 32-year old central defender was recently overlooked by Juergen Klinsmann for the provisional US squad for this year’s World Cup and suggested to SI.com that it has been a tough decision to take.

The former Standard Liege, Newcastle United, AC Milan, FC Twente, Sporting Lisbon and Malaga centre-back joined Sheffield Wednesday from QPR in January this year in the hope of making the US roster but was unsuccessful in his pursuits.

In the wake of his omission, 69-time international Onyewu spoke of the heartbreak he experienced when his name was not included in the preliminary 30-man roster.

“For this past season, since August, September, that has been my main focus, my goal.

“The exact moment that you realize that it won’t come into fruition is kind of like thousands of tons just dropped on you and you don’t know how to react.

“That was my initial reaction. I kind of found myself in a bad place for a little bit, but you pick your head up, you move on and you move forward. You can’t let that keep you down.

“[Klinsmann] gave me a call and he told me that he wasn’t selecting me for the 30-man camp, and that was it.

“To be 100 percent honest, I’m sure there was [a back-and-forth conversation] but I can’t even remember it, because it’s so irrelevant.

“There was no relevant response that he could have given me that would have put me at ease at all. The explanation didn’t really make a difference to me. It was just the decision itself.”

Onyewu added: “Obviously me being not selected is not going to want me to wish any malice on the U.S. team.

“It’s not the players’ fault. I definitely wish them much success. They have three hard games ahead of them, definitely games they can get results out of. I’m hoping for the best in their campaign and anxiously awaiting for the tournament to begin.”

Mesut Ozil : I Know How To Beat England!