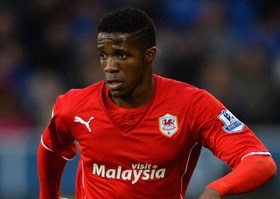 Solskjaer, who played alongside Ronaldo and saw the current World Player of the Year blossom in his first four seasons at Old Trafford between 2003 and 2007, believes the 21-year-old can improve in the same way.

Solskjaer said: “Wilf has quick feet like Cristiano, he is brave like Cristiano and wants to go forward. He is one of the best I’ve ever seen at taking people on.

“He has got to make a decision about how good does he want to be and how much does he love this game.

“Cristiano worked on his game every single day. I’ve never seen anyone work as hard as him. Before training, after training he was an exceptionally dedicated man.

“For me and everyone who has been at United he is the one we talk about because he has done it. He proved to everyone what being dedicated gets you, having a chef to cook your food, dedicating your whole life to football and being the best player in the world.

“He’s an example to everyone. I am not afraid of using Sir Alex or Cristiano as an example when I have to because to get the best out of your talent you need to be dedicated. We all know that not everyone has got it.

“It’s a desire and attitude from within, it’s what you’ve got in your heart and Cristiano’s always had it.”