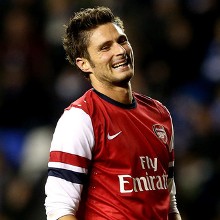 Olivier Giroud has thanked the fan who saved him from being left as red as the Arsenal shirt he tossed into the Madejski Stadium crowd.

The striker and fellow Frenchman Francis Coquelin ditched their jerseys after 90 minutes of Tuesday’s Capital One Cup thriller.

The confused pair thought the tie was heading for a replay after the Gunners had fought back from 4-0 down to level at 4-4.

But moments later they were ordered to dash back to the away end to plead for their shirts back from the 4,000 travelling supporters — so they could play in extra-time.