Arsenal striker Olivier Giroud is confident that France is capable of returning to the winners dais at this year’s World Cup. 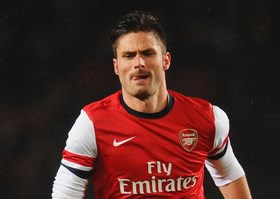 Les Bleus failed miserably at South Africa 2010, failing to get out of a group which consisted of Uruguay, Mexico and the hosts, following their second place at Germany 2006 when beaten by Italy in the final.

France have mixed their form over the past four tournaments, winning at home in 1998 before crashing out in the group stage in South Korea and Japan in 2002, but Giroud feels 2014 could be the year of ‘le coq gaulois’.

“That means we are going there to bring the trophy back. Try and reach the moon and at worst you will reach the stars.”