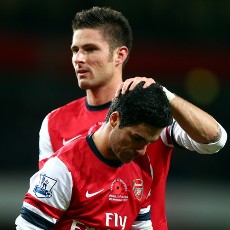 Olivier Giroud defended Mikel Arteta after his spotkick gaffe in their draw with Fulham.

The Arsenal midfielder missed the chance to give the Gunners all three points after his late penalty was saved.

Giroud told arsenal.com: “It’s a bad run but I think there is a lot of quality in this team. We will have better days in front of us.

“I was confident. Some guys asked me why I didn’t take the ball but before the game the boss [has] a penalty list. It’s very difficult because Mikel was under pressure because it’s the last minute. It’s not very easy to shoot a penalty.”

Arsene Wenger Delighted With The Improvement Of Olivier Giroud

Arsene Wenger Delighted With The Signing Of Lukas Podolski