Reports are out claiming that Arsenal striker Olivier Giroud is determined to prove his worth this season. 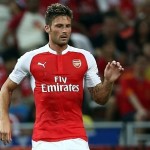 The France international striker has again seen his position come under scrutiny as the Gunners have been linked with a big-money move for Karim Benzema from Real Madrid.

“I always try to improve myself and I feel with the team, so yes, I am sure I can bring something more to the team and to my team-mates.”

Theo Walcott : Manchester City Won’t Want To Play Us At The Moment!