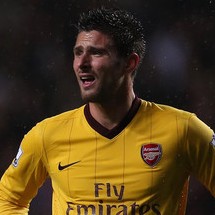 Arsenal striker Olivier Giroud has admitted that he is determined to repay the faith shown in him by manager Arsene Wenger.

The 26 year old French international striker is starting to get to grips with England’s top flight after a slow start and is determined to become one of Wenger’s key men.

He said: “I have to improve my statistics again and again. I have been patient and worked.

“When you come into a new club, there is a time to adapt. Even Thierry Henry experienced it. If I could achieved just half of what he achieved.”

He added: “I love that city [London], it is eccentric, and so cosmopolitan. There are so many things to do. You can never be bored.” Fabianski,Diaby,Arshavin and Gibbs travel to Munich