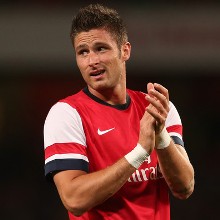 Arsenal striker Olivier Giroud has admitted that he enjoys playing with Lukas Podolski and Santi Cazorla.

The 26-year-old French international striker has looked more of a threat recently and says he has new signings Podolski and Cazorla to thank.

He said: “They are players who breathe football so you don’t have to adapt your game to play with them.”

Liverpool On The Verge Of Signing Daniel Sturridge