Reports are out claiming that Olivier Giroud has welcomed the signing of Jeff Reine-Adelaide at Arsenal. 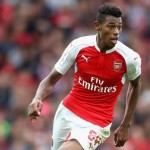 The 17-year-old was snapped up by the Gunners this summer from Ligue 1 side Lens’ academy.

The French international striker said: “I knew that he was in the under-17 European Championship winning side last summer.

“We have seen him on the pitch recently and he has shown his qualities. I think he’s quite mature for his age.

“He’s got a really good mentality and if he’s listening to the advice around him from his teammates, he could improve very quickly. His potential is fantastic.”