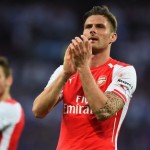 Reports have emerged claiming that Olivier Giroud believes he and his Arsenal teammates are all finding form at the same time.

The Gunners have lost just three times in 21 matches in all competitions in 2015 and striker Giroud believes that run of form is down to the players being fit and firing in unison under Arsene Wenger.

“We had a lot of injuries in the season and missed a lot of players, but now I think we are all at the boss’ discretion and he can pick the best team at the end of the week,” the Frenchman told the club’s official website.

“That is good news for him and for us because everybody is ready. It is efficient and competitive and that is what we need to reach our target.

“We need competition between us so everybody gives their best in training, so that’s why I think we are on a really strong run. We are maybe all in our best form at the same moment.”