It has been revealed that Arsenal striker Olivier Giroud says there is no doubt in the minds of the players that they want Arsene Wenger to stay. 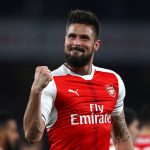 Sections of Gunners fans are calling for the 67-year-old Frenchman to step down at the end of the season and allow the dawn of a new era at the Emirates Stadium.

The weekend’s 3-1 loss to West Bromwich Albion was another dagger in the heart of Wenger but Giroud has made it clear that the playing group want him to continue on in the role he has held since 1996.

“We want to see Arsene Wenger sign an extension. To continue the adventure, because we support him,” Giroud told Canal+.

“We hope to win the (FA) Cup and qualify Arsenal for the Champions League.”