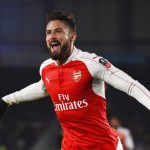 It has been revealed that Olivier Giroud isn’t surprised finding himself benched at Arsenal.

Giroud has admitted he was not surprised to lose his starting place in the Arsenal lineup to Danny Welbeck after his recent struggles.

“When the coach calls on me, I try to be efficient, it’s good for the confidence,” he said after France’s victory in Amsterdam. “Since early 2016, I scored 5 goals for my club.

“The coach thinks this is not enough and it cost me my place, but I already knew that and I worked, it does not make me worry, it will come.”