It has been reported that Arsenal striker Olivier Giroud is happy his goalscoring record this season after breaking the 20-goal barrier. 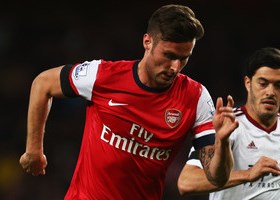 The French international striker made it 20 goals in all competitions with his strike in Arsenal’s 3-1 win over West Ham on Tuesday night.

“I enjoy my stats because when you are a striker you think that we are looking for the stats and assists as well,” Giroud told Arsenal’s official website.

“I am OK with my stats but I know the team will need me again for the last [four] Premier League games. So I need to score again and again.”