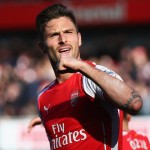 Reports are out claiming that Arsenal striker Olivier Giroud was delighted with victory over Everton.

The French international striker scored his 12th goal of the season as Arsenal secured a 2-0 win over Everton on Sunday to return to third in the Premier League.

“We will take it step by step because we have come back from a deep position,” Giroud told arsenal.com.

“The manager gave me a big possibility to bounce back and that’s what we wanted to do together.

“We carry on our good run in the championship even if we’ve been a bit disappointed after the Champions League defeat.

“We have done well this afternoon and we started the game on the front foot. We created chances and we are pleased with this victory.”