It has been reported that Olivier Giroud is set to sign a new deal with Arsenal. 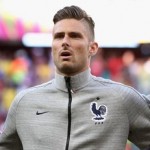 The Daily Express revealed that reports in France suggest Giroud is set to be offered a two-year contract extension as his current deals runs out in 2016.

However, it is not known what sort of pay rise he is likely to get.

The Gunners are in action at the weekend at home when they host the pre-season tournament the Emirates Cup.