Reports are out claiming that Arsenal striker Olivier Giroud shrugged off being denied a hat-trick in their FA Cup win over Middlesbrough. 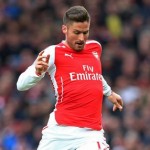 Giroud scored both goals in their 2-0 triumph.

“I have been waiting for a hat-trick for over two years now and but the boss decided to take me off.

“I’m pleased we won and I had two fantastic assists from Alexis and Gibbs. We kept another clean sheet and we carry on in our good run and we want to keep that going.” Arsenal Midfielder Aaron Ramsey On Brink Of Success With Wales