Manchester United were appalling as they suffered a 2-0 defeat at Olympiacos in the first leg of their Champions League last-16 match. 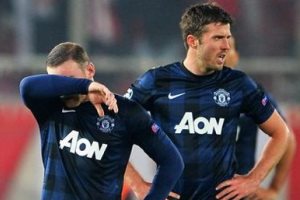 United struggled to put a pass together in the opposition half, and Olympiacos exploited the obvious lack of competence and confidence. Their best chance came when Tom Cleverley flashed a chance wide from a corner.

Olympiacos’ first goal came when Joel Campbell’s shot was blocked, and drifted out to an unmarked Giannis Maniatis, whose poor shot was heading wide until Alejandro Dominguez flicked it in the opposite direction, past the stranded David De Gea.

United’s similarly poor second half performance was duly punished when Campbell scored a fantastic goal, curling the ball around Rio Ferdinand from 25 yards.

Cleverley and Antonio Valencia, poor but not the only poor United players, were replaced by Shinji Kagawa and Danny Welbeck, but it made absolutely no difference to an alarmingly pathetic performance. Olympiacos will wonder why they did not score more than just two.

That Robin Van Persie didn’t look even mildly concerned to miss a great chance with 10 minutes left should worry David Moyes for the rest of his tenure – which might come to an end very soon. Anthony Martial To Be Handed Man Utd Start Against PSV