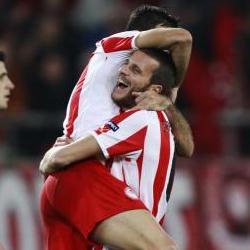 Arsenal ended their Champions League Group F campaign with a defeat at Olympiacos – but the Greeks missed out on the knockout stages.

Despite qualification and top spot already secure before tonight’s clash in Athens, Gunners boss Arsene Wenger – taking charge of his 200th European tie – will have expected better. Defensive lapses again proved costly as the English side trailed 2-0 at the break.

In-form Algeria striker Rafik Djebbour slotted home on 16 minutes after a loose ball was not cut out at the edge of the area, before substitute goalkeeper Vito Mannone – on for the injured Lukasz Fabianski – made a hash of his clearance as David Fuster made it 2-0 on 36 minutes.

However, with Marseille producing a late rally to win at Borussia Dortmund, it was not enough to see the Greeks through to the last 16.