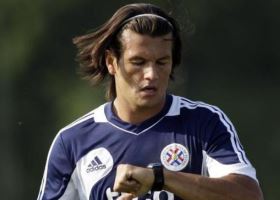 Olympiakos striker Nelson Valdez has declared that they will go for Manchester United’s throat tomorrow night.

Valdez revealed that Olympiakos are ready to hammer home their 2-0 advantage against Manchester United and won’t look to defensive tactics to secure their place in the Champions League last eight.

“Our goal is not to play defensively, despite the advances that we have from the first match,” he said.

“We can take the advantage we have and can finally get a big qualification.”