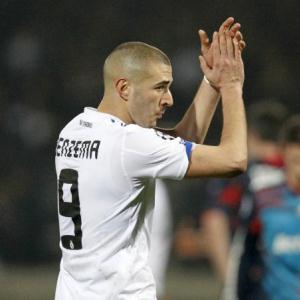 Lyon and Real Madrid drew 1-1 after Bafetimbi Gomis snatched a late equaliser to cancel out Karim Benzema’s opener in the first leg of their Champions League last-16 tie at the Stade Gerland.

Former Lyon favourite Benzema was afforded a warm reception from home faithful on his introduction from the bench midway through the second half but within 43 seconds he found the net to put Jose Mourinho’s side firmly in the driving seat.

However, Gomis volleyed past Iker Casillas when left unmarked inside the box from a free-kick to give the French side hope going into the second leg in Spain.

Les Gones are Real’s bogey team and have knocked them out three times in the Champions League in recent seasons so Mourinho cannot take anything for granted despite an assured performance from his side.