Reports are out claiming that Emiliano Martinez’s loan spell with Wolves took a turn for the worse on Wednesday night. 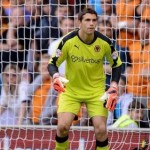 The 22-year-old Argentine goalkeeper, who made his debut for the Wolverhampton club in the weekend’s 1-1 draw with Hull City, started at the Molineux when the R’s made the trip to the West Midlands.

It was all looking for rosy for Kenny Jackett’s men when Benik Afobe, who is being heavily linked with Norwich City, and Kevin McDonald had hit the back of the net before the 25-minute mark but the relegated West Londoners turned it on to come away with a 3-2 comeback victory.

Talented winger Phillips, who is also attracting interest from top flight clubs, levelled seven minutes into the second half when he received the ball from Massimo Luongo before cutting back inside and firing goal-ward to see the ball take a deflection off two Wolves defenders and trickle past Martinez.

Chris Ramsey’s R’s completed their come-from-behind win in the 72nd minute when Phillips unleashed from 25 yards with Martinez getting a palm to the ball, only to see it roll over the line.

However, Gunners youngster Martinez was on-hand to deny Luongo later in the piece to prevent it from being a complete R’s whitewash in the second half.