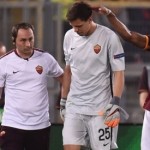 Reports are out claiming that Roma goalkeeper Wojciech Szczesny faces six weeks out with a dislocated finger.

The on-loan Arsenal keeper suffered the injury during their draw with Champions League opponents Barcelona.

Roma released a statement this morning confirming the extent of the Poland international’s injury.

“The Giallorossi goalkeeper has suffered a dislocation of the fourth finger on his left hand and will undergo tests in the next few hours to confirm the extent of the injury,” read the statement.